Having a new diagnosis skin cancer can be traumatizing, but there are plenty of available treatments that can be performed. At Swann Dermatology, we take great pride in our team offering comprehensive evaluation and management for skin cancer including cutting-edge methods of skin cancer removal. We offer preventative services including treatment of precancerous lesions with prescriptions and photodynamic therapy and offer a wide array of cosmeceuticals and sunscreens that Dr. Swann himself has found ideal to prevent skin cancers. Our team offers comprehensive skin cancer treatment unparalleled in Southwest Missouri.

We offer Mohs micrographic surgery, where Dr. Swann operates as the skin cancer surgeon and pathologist, using the microscope to identify and localize the tumor roots and extract them in a way that offers the absolute highest cure rate for skin cancers and also taking the least amount of healthy neighboring skin. Many skin cancers do not require Mohs surgery and we can treat these tumors by conventional excisions or other destructive modalities. We will help identify the best treatment option for you and put the diagnosis behind you. For more information about the most common types of skin cancer and how each are treated differently, we hope you find our skin cancer educational material useful. 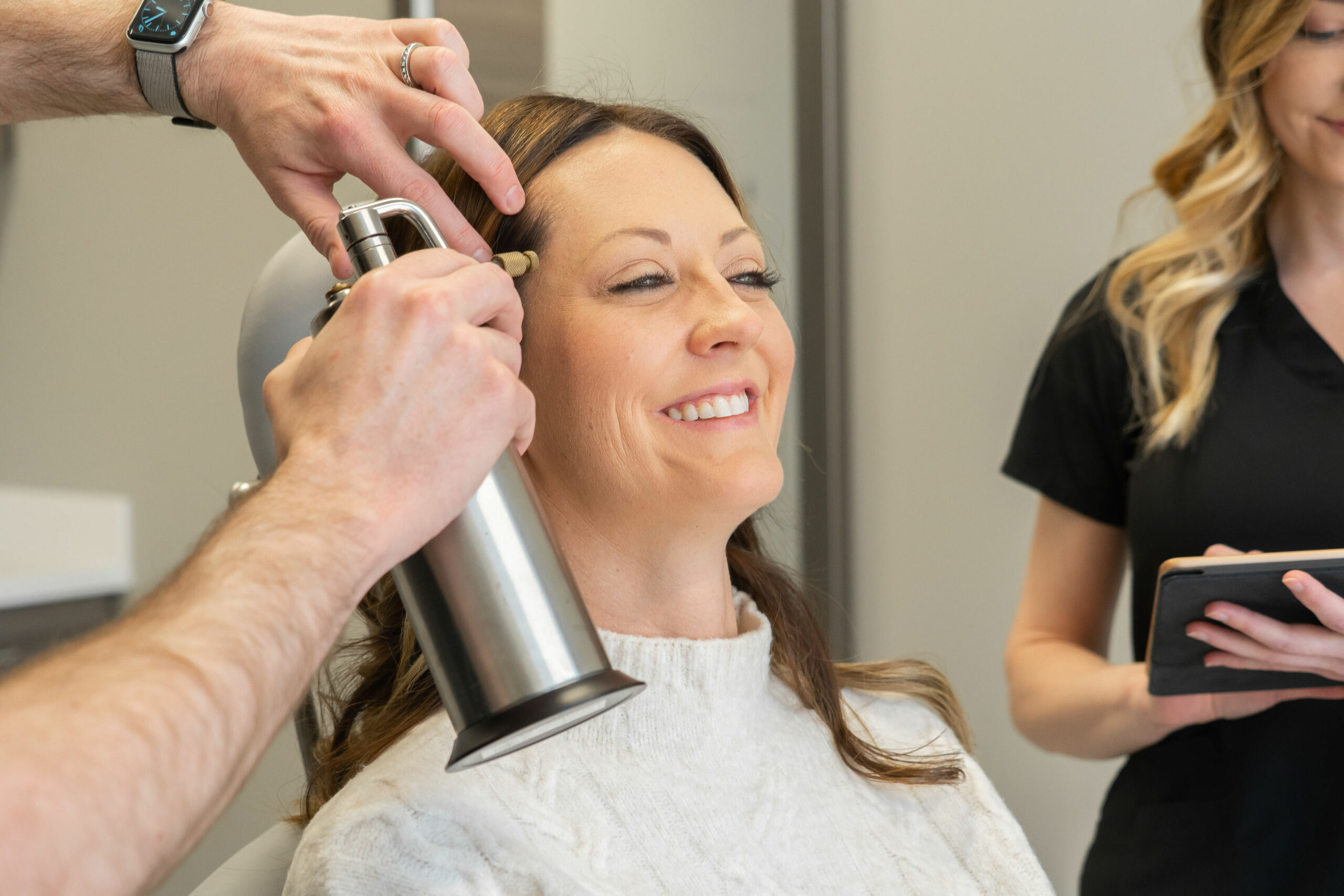 We offer Electronic Brachytherapy with a radiation machine specifically designed to treat skin cancer without surgery. This is different than traditional external beam radiation therapy. With brachytherapy, the dose-curves are steep. This means that the radiation field is kept very tight and small. Cure rates are not as high as Mohs surgery, but approach 95-97% without surgery. Esteya is a patient-friendly, electronic brachytherapy solution for treating skin cancer. Specifically designed for non-melanoma skin cancer treatments, Esteya provides a non-surgical treatment that destroys cancer cells while sparing healthy surrounding tissue. There’s minimal or no recovery period — which means there will be negligible impact on your daily activities. Depending on tumor characteristics including the histologic type, depth, tumor size and location, our team will develop a plan. Many plans require visiting our office twice weekly for 4-6 weeks.

More than a million new cases of skin cancer are diagnosed every year in the United States, making it the most common of all cancers. Skin cancer can be an even greater concern for those with light skin or eye color and an active outdoor lifestyle.  Prevention and early detection are the best defenses against skin cancers and routine screening is important. We specialize in skin cancer management with advanced treatment options.

In order to detect skin cancer early, you should examine your skin regularly to identify areas of skin changes in size, shape, color or diameter. Protecting your skin from the sun is also important as 90 percent of all basal and squamous cell carcinomas are thought to be caused by overexposure to ultraviolet light.

There are three basic forms of skin cancer. The two most common are basal cell and squamous cell carcinomas which account for 90 percent of all cases. The third kind, and the most dangerous, is malignant melanoma which can spread throughout the body. When detected early and treated properly, the recovery rate for all three types can be very high.

One in five Americans will develop skin cancer at some point in their lives. Skin cancers are generally curable if caught early. However, people who have had skin cancer are at a higher risk of developing a new skin cancer, which is why regular self-examination and doctor visits are imperative.

This is the most common form of skin cancer. Basal cells reside in the deepest layer of the epidermis, along with hair follicles and sweat ducts. When a person is overexposed to UVB radiation, it damages the body’s natural repair system, which causes basal cell carcinomas to grow. These tend to be slow-growing tumors and rarely metastasize (spread). Basal cell carcinomas can present in a number of different ways:

Despite the different appearances of the cancer, they all tend to bleed with little or no cause. Eighty-five percent of basal cell carcinomas occur on the face and neck since these are areas that are most exposed to the sun.

Risk factors for basal cell carcinoma include having fair skin, sun exposure, age (most skin cancers occur after age 50), exposure to ultraviolet radiation (as in tanning beds) and therapeutic radiation given to treat an unrelated health issue.

Treatments for basal cell carcinoma include:

Squamous cells are found in the upper layer (the surface) of the epidermis. They look like fish scales under a microscope and present as a crusted or scaly patch of skin with an inflamed, red base. They are often tender to the touch. It is estimated that 250,000 new cases of squamous cell carcinoma are diagnosed annually, and that 2,500 of them result in death.

Squamous cell carcinoma can develop anywhere, including inside the mouth and on the genitalia. It most frequently appears on the scalp, face, ears and back of hands. Squamous cell carcinoma tends to develop among fair-skinned, middle-aged and elderly people who have a history of sun exposure. In some cases, it evolves from actinic keratoses, dry scaly lesions that can be flesh-colored, reddish-brown or yellow black, and which appear on skin that is rough or leathery. Actinic keratoses spots are considered to be precancerous.

Treatments for Squamous Cell Carcinoma include:

While melanoma is the least common type of skin cancer, it is by far the most virulent. It is the most common form of cancer among young adults age 25 to 29. Melanocytes are cells found in the bottom layer of the epidermis. These cells produce melanin, the substance responsible for skin pigmentation. That’s why melanomas often present as dark brown or black spots on the skin. Melanomas spread rapidly to internal organs and the lymph system, making them quite dangerous. Early detection is critical for curing this skin cancer.

Melanomas look like moles and often do grow inside existing moles. That’s why it is important for people to conduct regular self-examinations of their skin in order to detect any potential skin cancer early, when it is treatable. Most melanomas are caused by overexposure to the sun beginning in childhood. This cancer also runs in families.

Melanoma is diagnosed via a biopsy. Treatments include surgical removal, radiation therapy or chemotherapy.

What to look for when trying to spot Melanoma:

The key to detecting skin cancers is to notice changes in your skin.

The American Academy of Dermatology has developed the following ABCDE guide for assessing whether or not a mole or other lesion may be becoming cancerous.

If any of these conditions occur, please make an appointment to see one of our dermatologists right away. The doctor may do a biopsy of the mole to determine if it is or isn’t cancerous.

Roughly 90% of nonmelanoma cancers are attributable to ultraviolet radiation from the sun. That’s why prevention involves the following: 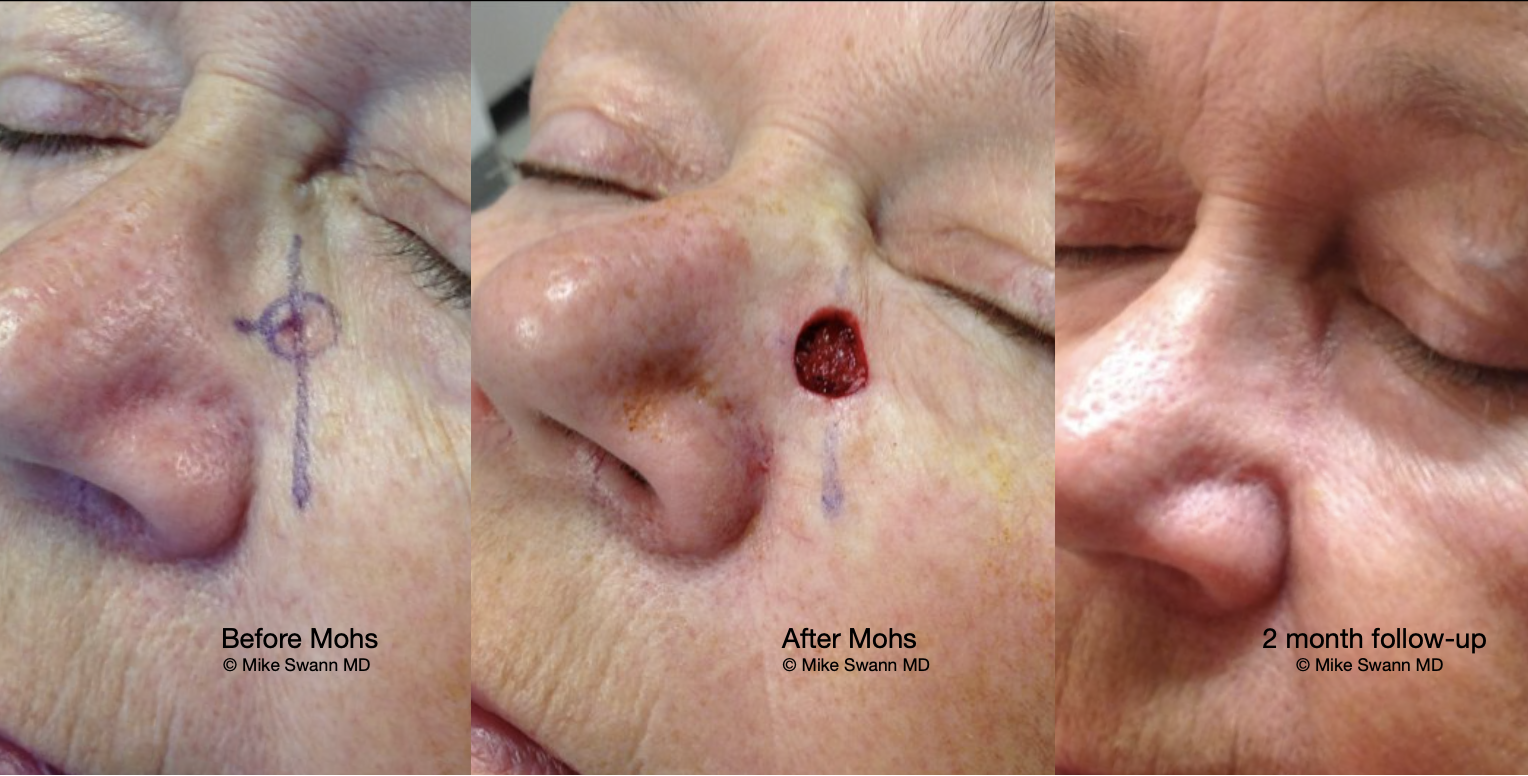